Gayle dominates as RCB amass 262 for 3 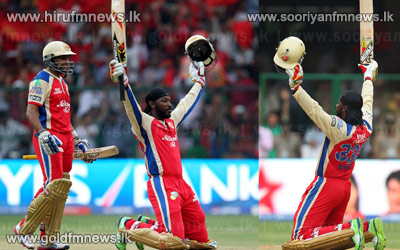 The Royal Challengers Bangalore amassed 262 runs for the loss of 3 wickets against the hapless Pune Warriors in today’s IPL encounter between the two sides.

Gayle, together with Tillekeratne Dilshan put on 167 runs for the first wicket in which Dilshan’s contribution was just 33 runs.

AB De Villiers chipped in with cameo of 31 runs late in the RCB inning.

Ashok Dinda was the pick of the Pune Warriors bowlers capturing 2 wickets for 48 runs in his 4 overs.