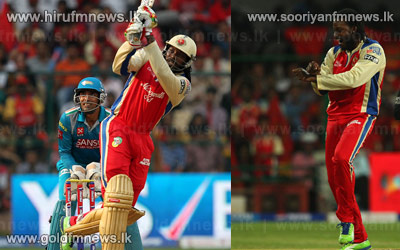 Chris Gayle smashed the most breathtaking knock in the history of T20 cricket, blasting an incredible 175 off a mere 66 balls, as Royal Challengers Bangalore crushed a hapless Pune Warriors by a record 130 runs in the Indian Premier League yesterday.

Gayle hit the fastest century, off just 30 balls, and the highest-ever individual score in a T20 game, surpassing Kolkata Knight Riders' Brendon McCullum, who hit 158 off 73 balls against RCB at this very Chinnaswamy Stadium.

Incidentally, RCB's total of 263 for five was also the highest-ever total in any T20 game.

Chasing a T20 world record target of 264, Pune could not manage more than 133 for nine in the allotted 20 overs, paving the way for Bangalore to post the biggest IPL victory in terms of runs.

Meanwhile, Kings XI Punjab 121 for 5 beat Delhi Daredevils 120 for 7 by five wickets in yesterday’s IPL which was played in Delhi.