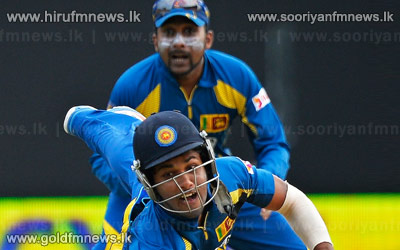 A career-best 174 not out by Man of the Match Upul Tharanga and his record-breaking 213-run partnership with Mahela Jayawardene helped Sri Lanka beat India by 161 runs in the third match of the Celkon Mobile Tri-Nations Series Cup in Kingston yesterday.

India, with poor displays in all departments of the game, were thoroughly outplayed and looked nothing like the No. 1-ranked side that won the Champions Trophy just nine days ago.

Chasing 349 to win, India needed to fire from the word 'go', but lost Rohit Sharma in the fifth over to a sharp catch by Angelo Mathews, the Sri Lankan captain, off Nuwan Kulasekara's bowling.

While Shikhar Dhawan hit three bright boundaries after a watchful beginning, Murali Vijay, coming in at No. 3, looked uncomfortable as the Sri Lankans restricted the pair to singles, taking the air out of the chase.