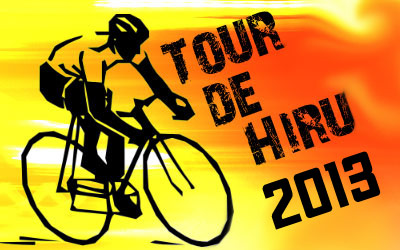 The larges of its kind in the history of bicycle racing in the island, Tour de Hiru will be held under two stages for 2 days.

The first phase of the race which covers 137 kilometres will start from Air Force grounds at 8.30 in the morning. The race will run on Galle Road via Dehiwala, Moratuwa, Panadura and turns on Bandaragma road to pass Horana, Ingiriya, Kiriella and ends in front of the Bus Stand in Balangoda.

The second phase which covers 161 kilometres will start from Balangoda at 8.30 am the following day and passes Pelmadulla, Ratnapura, Eheliyagoda nd Avissawella. Later it will reach Hanwella along the Low Level road and turns towards Kaduwela.

From Kaduwela, the race will proceed to Yakkala and pass Nittambuwa, Attanagalla and ends in Kirindiwela.

Tour de Hiru of this year too has been organized under the full supervision of the Sri Lanka Interim Cycle Committee and observing all internationally accepted rules and regulations.

Over 150 licensed cyclists have been enlisted to this year’s Tour de Hiru.

Tour De Hiru is considered to be the cycling tour in Sri Lanka with the highest prize money awarded to winners.

Close to 1 million rupees have been set aside for this year’s Tour De Hiru and apart from the top 3 placed riders, the winners of the sprint events and the best team overall will also win cash prizes.

In addition the best climber and the best under 23 rider will also be given cash prizes.

Tour De Hiru, the country’s biggest cycling tour will be brought to you live on Hiru TV from tomorrow onwards and you will be able to get live updates through Hiru FM as well.