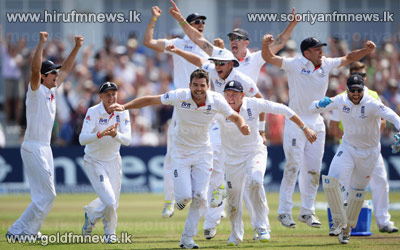 James Anderson was England's final-day hero as the hosts held their nerve to complete an astonishing 14-run victory over Australia in an unforgettable climax to the opening Ashes Test.

Amid unbearable tension, Australia's final pair of Brad Haddin and James Pattinson took the tourists to the brink of victory with a partnership of 65.

But when Haddin was caught behind for 71 off an inside edge to give Anderson his fourth wicket of the day and 10th of the match, England could celebrate one of the closest wins in Ashes history.

The victory, which for sheer drama almost matched the incredible Edgbaston Test in the 2005 Ashes, puts England 1-0 up in the five-match series going into the second Test which starts at Lord's on Thursday.