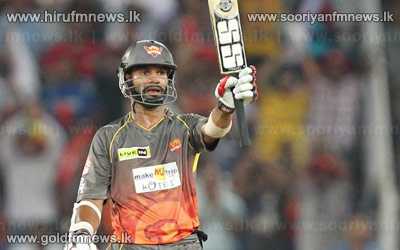 A century-stand between Shikhar Dhawan and Parthiv Patel, both of whom scored effortless half-centuries, and a late cameo by Thisara Perera helped Sunrisers Hyderabad cruise to an 8-wicket win over Kandurata Maroons.

Kumar Sangakkara and Lahiru Thirimanne also scored aggressive half-centuries to set up a strong target, but Kanduratas bowling and fielding crumbled against persistent attack from Sunrisers batsmen to be left in a position from where they need to win both their remaining matches.

Chasing 169, Dhawan and Parthiv never let the pressure of the chase build as they kept finding the boundaries from the start of the innings.