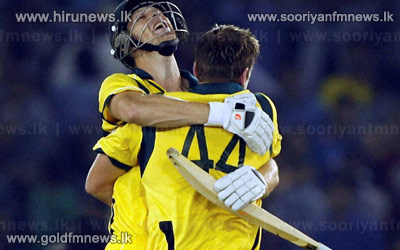 AUSTRALIA have exacted revenge for Wednesdays stunning loss to India by inflicting a record-breaking run chase of their own to win the third one-day match in Mohali.

Just three days after India produced the second-greatest chase of all time, Australia produced a miracle win when faced with a similarly mountainous task.

Led by James Faulkners incredible 64 off 29 balls, Australia ran down Indias target of 304 with three balls and four wickets to spare - easily their biggest successful chase on Indian soil.