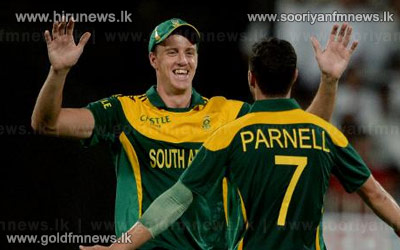 South Africas Lahore-born legspinner Imran Tahir grabbed 3 for 45 as the Proteas defeated Pakistan by one-run in a thrilling opener to their one-day series yesterday.

Chasing South Africas total of 183, Pakistan reached 165 for 4 before a sensational collapse saw it being bowled out for 182.

South Africa owed its total to Wayne Parnells 56 maiden half century, after Saeed Ajmal 4 for 30 and Shahid Afridi 3 for 37 had reduced the Proteas to 129 for 8.