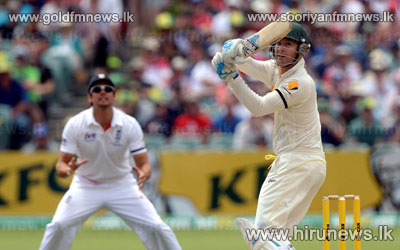 England's hopes of retaining the Ashes took another battering as Australia took complete control of the second Test on an utterly one-sided second day.

A brilliant 148 from Michael Clarke and belligerent 118 from Brad Haddin took the game away from England before lower order hitting from Ryan Harris allowed the captain to declare on an intimidating 570-9.

Given 21 overs to survive in the evening session, England lost Alastair Cook, clean-bowled by the runaway Mitchell Johnson for three before Michael Carberry and Joe Root clung on to leave them 35-1 at the close.