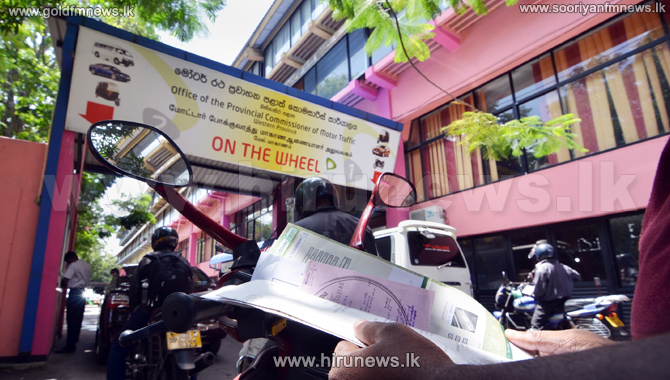 Due to decision made to suspend the one day services provided for vehicles under several categories, the people who come to obtain registration certificates have been severely inconvenienced.

On the order of the Commissioner General of Motor Traffic, on 25 of last month all services under the one-day service were suspended for all vehicles under categories 64, 65, 32, G, H and J.

The Commissioner General of Motor Traffic informed that these are relevant to all vehicles under all classes of vehicles, all cabs, jeeps and vans as well as all triple purpose vehicles and all Lorries.

An employee Narahenpita main office said that the original files of all vehicles belonging to all categories are being taken to the Werahera Motor Traffic and Transport Department as at present.

Anyhow, an employee of the Motor Traffic and Transport Department told the Hiru News Division that through this people who come to obtain registration and transfer certificates of vehicles have been facing severe inconvenience.

With an irregularity being revealed of chassis numbers of vehicles being changed on the recommendations of COPE the one-day service was temporarily suspended and the relevant officer said that suspending this one-day service temporarily rather than taking action against the officers involved was very problematic.

Although we contacted over the phone, Commissioner General of the Department of Motor Traffic Transport, A. H. K. Jagath Chandrasiri to find out more information, he requested that we come to his office to obtain more information.