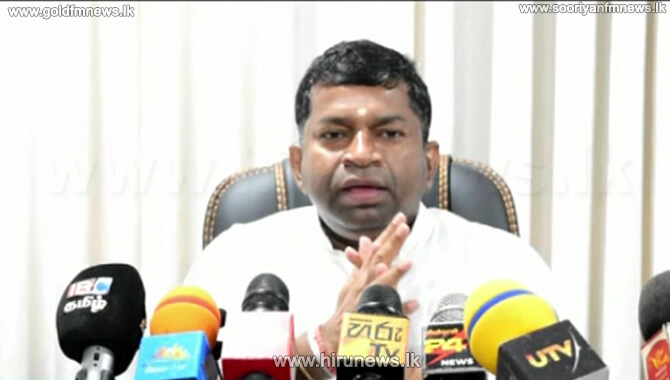 Batticaloa High Court Judge DS Soosaidasan issued the order this morning after the Attorney General's Department informed the court that it did not intend to proceed with the case against MP Sivanesathurai Chandrakanthan alias Pillayan.

MP Sivanesathurai Chandrarakanthan alias Pilleyan was arrested by the CID on October 09, 2015.

The five suspects, including the MP, who were later produced in court, were remanded and released on bail on November 24 last year.

“The 'Yahapalanaya' government that came to power in 2015 imprisoned me to please those who supported them. Especially at the request of the Tamil National Alliance, which particularly supported them, I went to jail because former President Maithripala Sirisena. But I was confident that this would be corrected. I have nothing to do with this case. At least I have not seen anyone called Joseph Pararajasingham. I was imprisoned in this manner because some people had said that I would rise in the Eastern Province. Bail applications made for several years but were rejected. In some cases, those involved in the judiciary needed to be promoted. They pleased the 'Yahapalanaya' government. Sumanthiran and Mangala Samaraweera were directly involved in this. I am the best proof that the 'Yahapalanaya' government was used to carry out political revenge.

Some members of the opposition made false allegations and tried to take me to court. Today Ranjan Ramanayake went to jail for contempt of court. Some people try to connect that incident with my case. The impact they have had on the judiciary in the recent past has been proven by audio recordings. How many more could they have done this to? I must say that I have never spoken to the President or the Prime Minister about my release. ”