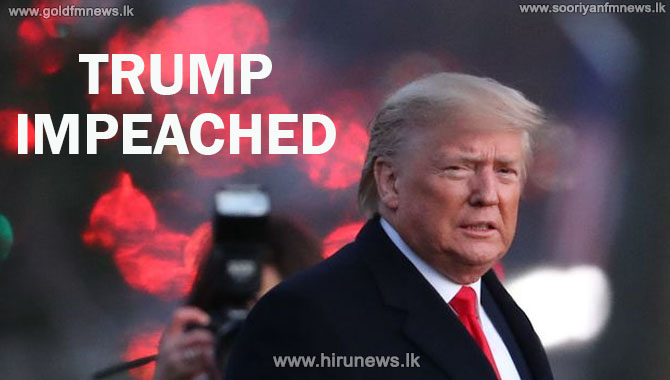 US President Donald Trump was impeached for the second time during his term today.

The house voted 232-197 in favour of the resolution to impeach President Donald Trump.

The house reached the threshold required to impeach President Trump again in a historic first, with at least 217 members having now cast votes to impeach the President, including at least nine Republicans.

The move came after Vice President Mike Pence said he would not invoke the 25th Amendment and declare Trump unable to perform duties.

Democrats charged him with "incitement of insurrection" for his role in last week’s deadly Capitol attack.

The impeachment resolution charged Trump with a a single article, "incitement of insurrection."

The US House of Representatives voted to impeach President Trump.

Top Democrat Nancy Pelosi says "He must go. He is a clear and present danger to the nation"/

In a new statement, Trump called for no violence from supporters in coming days. He is accused of inciting his followers to storm the Capitol last week.

He referenced Republican Representative Liz Cheney’s condemnation of Trump’s actions and her vow to vote to impeach.

“There has never been, she said, a greater betrayal by the president of the United States of this office, of his office and his oath to the constitution,” he said.

“This attack was not from abroad, it was, as Liz Cheney said, summoned, assembled, and inflamed by the president of the United States of America,” he said.

This will be no ordinary roll call,” he said of the upcoming voting. “This is about our country, our Constitution and our democracy. These votes will be inscribed on the scroll of history.”

The House vote against him would now pave the way for a Senate trial and possible removal from office.