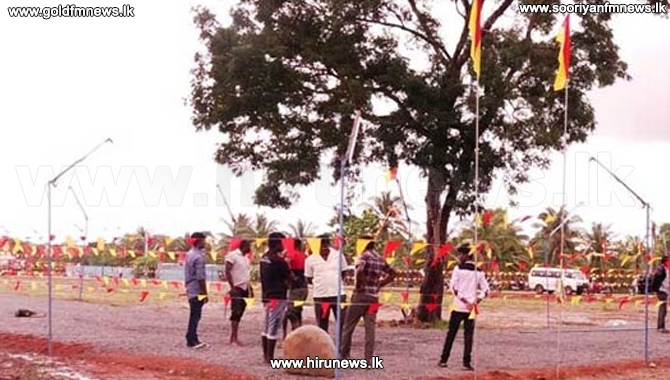 It is reported that the birthday of Liberation Tigers of Tamil Eelam (LTTE) Leader Velupillai Prabhakaran which falls on 26 November and the Maha Viru Day which falls on 27 Novembers have been celebrated secretly and in various places in the Northern Province.

Meanwhile, unlike in previous years, steps have been taken to hold Maha Viru Day celebrations in several places in the North, however, a tensed situation arose between the security forces deployed to halt these celebrations and those who carried out the festivities.

A heated situation took place when the police attempted to arrest a person who was among a group that was attempting to celebrate Maha Viru Day near the Mullaitivu beach.

However, the police stated that the suspect was taken into police custody in connection with an assault and was later released on police bail.

Security forces dealt with the opposition from another group that attempted to celebrate the Maha Viru Day at a Maha Viru cemetery in Velanai, Jaffna, when the security forces took steps to stop it.

In such a situation, political representatives, civil society organizations and family members of the Jaffna, Mullaitivu, Mannar and Kilinochchi districts have celebrated the Maha Viru Day in various ways without announcing it as a Maha Viru Day celebration.

Maha Viru Day celebrations were held at the Nandikadal Lagoon in Mullaitivu, at several Hindu temples in Mullaitivu, near the beach and at around 20 locations in the Jaffna District.

It is reported that a group of students at the Jaffna University had secretly cut a cake for the 67th birthday of Prabhakaran in a building inside the university.

Maha Viru Day is held each year on 27 November, the date on which the first LTTE cadre, Lt. Shankar (Sathiyanathan alias Suresh), is said to have died in combat in 1982.