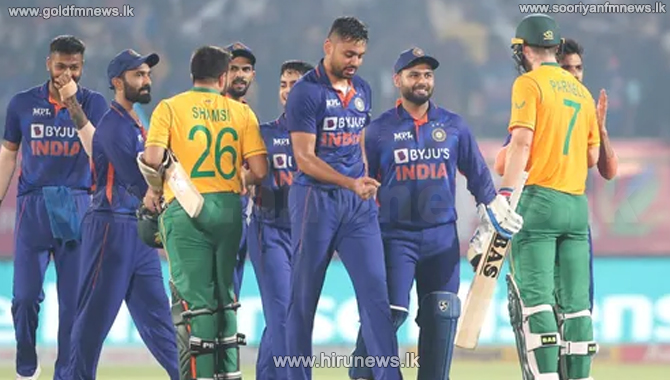 Dinesh Karthik played a knock to remember before Avesh Khan with a fiery spell help India steam-rolled South Africa by 82 runs on Friday to level the five-match series 2-2.

Karthik (55 off 27) scored his maiden fifty close to 16 years after his T20 debut and alongside vice-captain Hardik Pandya (46 off 31 ) took India to a fighting 169 for six. For the second game in a row, South African batters faltered and collapsed to 87 for nine in 16.5 overs with skipper Temba Bavuma retired hurt.

Avesh (4/18) led India's brilliant display with the ball and recorded his career-best figures in the process. It was an away team's lowest total in T20 Internationals in India.

Bhuvneshwar Kumar and Avesh were impressive with the new ball as South Africa slipped to 35 for two in the powerplay. After a hit on the shoulder, Temba Bavuma (8) injured his left elbow with a dive on the run and had to leave the field. He didn't even come out for the post-match presentation ceremony.

South Africa could never get into the chase with wickets falling regularly. The series decider will be played in Bengaluru on Sunday.

Earlier, the Indians were struggling at 81 for four before a 65-run stand between Hardik and Karthik brought the home team back into the game. India were able to amass 73 runs in the last five overs.

The momentum changing stand came via Hardik and Karthik who swept his way to a memorable knock.

Having made his T20 debut back in December 2006 when India played their maiden game in the shortest format, the man of comebacks finally completed his first half century.

Standing deep in the crease, Karthik relied on the sweeps -- conventional towards square-leg, slogs over cow corner and reverse over '45' both against spinners and pacers, to get the bulk of his boundaries.

The most attractive stroke of his innings was the slog sweep off pacer Dwaine Pretorius that sailed over deep square leg.