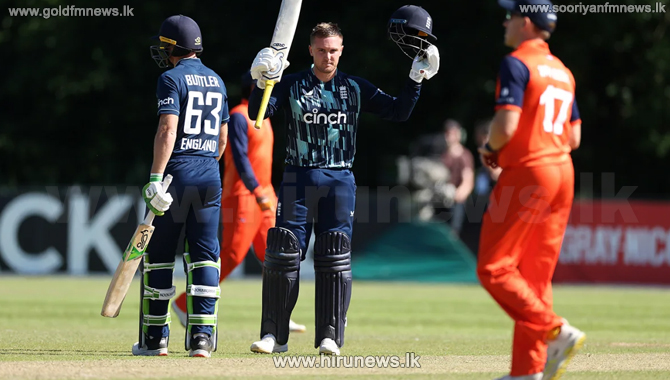 England blazed down a target of 245 in 30.1 overs to seal a 3-0 clean sweep against Netherlands in Amstelveen and go top of the World Cup Super League in the process.

Jason Roy and Jos Buttler put on an unbroken 163 for the third wicket in just 20.1 overs, with Roy reaching an 86-ball hundred - his first ODI century since the 2019 World Cup - off the final ball of the 30th over, driving Bas de Leede through mid-off for four; Buttler crunched the next ball, off Tim Pringle, over the media tent for six to seal the win.

Netherlands were well-placed at 203 for 3 with a ball left in the 40th over after being asked to bat first by Buttler, deputising for the injured Eoin Morgan, but lost their last seven wickets for 41 runs and were bowled out with four deliveries unused.

David Willey was the pick of the England attack with 4 for 36, returning to mop up the lower order after dismissing Vikramjit Singh for the third time in the series, and Netherlands were clearly some way short of par on a fresh, dry pitch on another beautiful day in Amsterdam's suburbs.

Scott Edwards, who has replaced the retired Pieter Seelaar as Netherlands' captain, made his third half-century of the series while de Leede and Max O'Dowd also reached 50, but none could press on and convert their starts into something substantial.