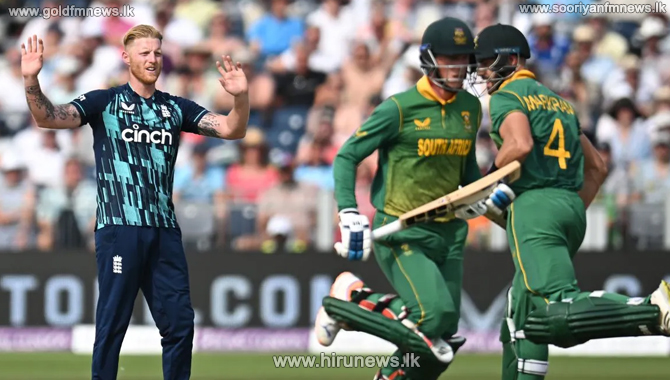 England farewelled Ben Stokes from ODI cricket with defeat in the first of their three-match series against South Africa on the hottest day in the country since records began. Temperatures topped 40 degrees and there were serious concerns around player and fan safety but the match was completed without major incidents, though there were reports of supporters struggling in the heat.

Rassie van der Dussen was the coolest man on the park and scored his third ODI century, a career-best 134, as South Africa posted their highest ODI score in England and the second-highest at Chester-le-Street. That asked England to complete their sixth-highest successful run-chase but South Africa's spinners, in particular, combined discipline and attack to seal a statement win. Keshav Maharaj, Tabraiz Shamsi and Aiden Markram bowled 15 overs and took five for 120 between them.

Though this series does not count for World Cup Super League points, it is the start of an important eight months for South Africa which includes tours to England and Australia and the T20 World Cup. They began it without regular white-ball captain Temba Bavuma, who injured his elbow ahead of this trip, but Maharaj's decision-making was flawless from the moment he won the toss and chose to shield his fielders from the afternoon sun.