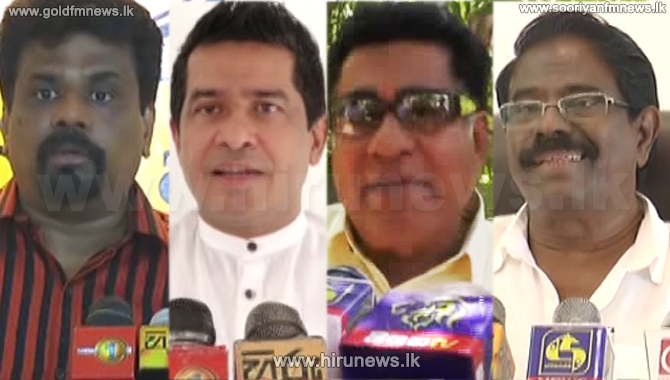 Jana Balavegaya candidate Anura Kumara Dissanayake says that when Ranil Wickremesinghe was going to sell the Hambantota port, Mahinda Rajapaksa in parliament warned the company that was going to buy it.

Sri Lanka Podujana Peramuna candidate Nimal Siripala de Silva said at a public rally that the government was reviewing what was done during the past regime and will taker legal action.

Sri Lanka Podujana Peramuna candidate Thenuka Vidanagamage says that he did not sleep in Parliament.

Mahinda Amaraweera, the Sri Lanka Podujana Peramuna candidate says that if they fight over preferential votes, they will not be able to get form a government with a two-thirds majority.

Samagi Janabalavegaya candidate Wijith Vijithamuni Soyza says that Sajith Premadasa will be made the Prime Minister by removing a slice off pohottuwa.

Samagi Janabalavegaya candidate Sujeewa Senasinghe says that there is evidence that Mahinda Rajapaksa helped Ranil to make the list.

Given below are comments of some other politicians