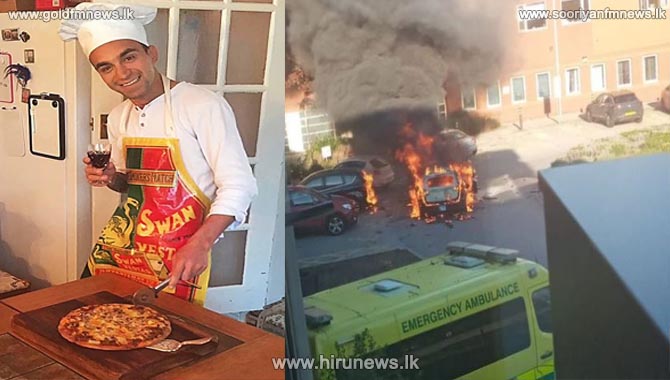 The suicide bomber who died inside a taxi when his device blew up outside a hospital in Liverpool on Remembrance Sunday has been unmasked as a pizza-baking Christian convert and failed asylum seeker.

MailOnline can reveal that Enzo Almeni, 32, arrived in the UK from Iraq several years ago and converted from Islam to Christianity in 2017 at the cathedral it is believed he wanted to attack yesterday.

Friends said Almeni was born Emad Jamil Al-Swealmeen to a Syrian father and an Iraqi mother, and is believed to have spent a large part of his life in Iraq.

He was arrested for possession of a 'large knife' after the rejection of his asylum claim in 2014. This resulted in him being sectioned under the Mental Health Act and hospitalised for several months.

It is thought that Almeni was a motor racing fan who changed his name by deed poll in honour of Italian supercar creator Enzo Ferrari, and in a bid to sound more Western on his asylum application.

Almeni spent most of his time in the UK in Liverpool, where he was being supported by Christian volunteers from a network of churches who help asylum seekers. He spent eight months living with devout Christians Malcolm and Elizabeth Hitchcott at their home in the Aigburth district of Liverpool.

Almeni converted to Christianity in Liverpool's Anglican Cathedral four years ago, which it is thought he had wanted to attack on Remembrance Sunday as 1,200 military personnel, veterans and families of the fallen gathered to observe the 11am minute's silence.

It is thought he initially asked Mr Perry to drive him to the cathedral, but that traffic and road closures stopped him from getting there. It is believed he died after being locked in a cab by hero taxi driver David Perry as it exploded into a fireball outside Liverpool Women's Hospital.

Detectives and MI5 spies are investigating whether the bombing was an Islamist-inspired attack and if Almeni had been motivated to kill himself and others. Security sources told the Mail that Almeni's mental health problems were 'a key line of inquiry' in understanding his motivation.

Speaking exclusively to MailOnline today, Mr Hitchcott, a former British Army soldier, said he met Almeni in 2015 through his work at Liverpool Cathedral when he started expressing an interest in converting to Christianity.

Mr Hitchcott said: 'He first came to the cathedral in August 2015 and wanted to convert to Christianity. He took an Alpha course, which explains the Christian faith, and completed it in November of that year. That enabled him to come to an informed decision and he changed from Islam to Christianity and was confirmed as a Christian by at least March 2017, just before he came to live with us. He was destitute at that time and we took him in.'

Police said Almeni was picked up in the Rutland Avenue area of the city. As the car reached the hospital's passenger drop-off point, it exploded.

Police said he had been living at a hostel for asylum seekers - run by private contracting giant Serco - in Sutcliffe Street, Liverpool, 'for some time' before renting a 'bomb factory' two miles away in Rutland Avenue.

Four men arrested under terrorism laws in the Kensington area of Liverpool - three aged 21, 26 and 29, who were held on Sunday, and a man aged 20 who was detained on Monday - have now been released from police custody following interview, Counter Terrorism Police North West said on Monday night. MI5 is assisting police with the investigation.

Meanwhile, forensic officers continued the delicate task of searching the 'bomb factory' from where Almeni booked the taxi. Eight nearby homes have been evacuated, and officers on Monday carried out a controlled explosion on an item taken from the property in nearby Sefton Park in what they described as 'a precaution'.

Detective Chief Inspector Andrew Meeks of Counter Terrorism Police North West said: 'Our enquiries are very much ongoing but at this stage we strongly believe that the deceased is 32-year-old Emad Al Swealmeen.

'We continue to appeal for any information about this incident and now that we have released his name any information that the public may have about Al Swealmeen no matter how small may be of great assistance to us.'

The UK's terror threat level was raised to 'severe' today following an emergency COBRA meeting at Downing Street. Police and security services advised the Prime Minister that another attack on British soil is now 'highly likely'. It came exactly a month after Conservative MP Sir David Amess was fatally stabbed during a constituency surgery in Leigh-on-Sea, Essex.

At a Covid press briefing this afternoon, Boris Johnson dramatically urged the country to be 'vigilant' and called the blast a 'stark reminder' of the risks of terrorism.

Home Secretary Priti Patel cancelled a planned trip to Paris to discuss the Channel migrant crisis so she could be briefed on the Liverpool bombing.