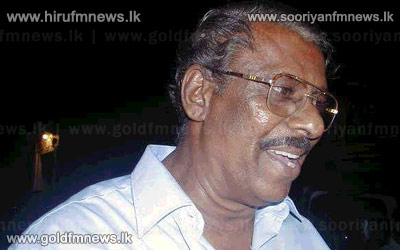 Latest reports reveal that India has indicated its displeasure over the consideration of Mavai Senathirajah as the chief minister candidate of the TNA in the forthcoming North Provincial Council election.

According to Asian tribune web site, Indian intelligence agency RAW  or Research Analysis Wing , it seems to have notified to TNA leadership that Mavai Senathirajah was unacceptable to India as he was the person who forcefully brought the moderate Tamil political leaders into the fold of the LTTE in 2004, despite requests and warning by India.

Furthermore, there are allegations against Mavai Senathirajah’s involvement in the tragic episode of the assassination of TULF Secretary General A. Amirthalingham and Yogeswaran.

Asian Tribune also reported that representatives of a few leading Tamil Dispora organizations in Europe too has indicated their opposition to Mavai Senathirajah’s nomination as the Chief Minister candidate for the North Provincial Council.

It is reported that 2 candidates are vying for the chief ministerial post for the Northern provincial council election from the TNA.

The 2 candidates are MP Mavai Senadiraja and a former Judge C V Wickneshwara.

19 out of the 21 coordination committee members are in favour of MP Mavai Senadiraja but Party Leader R Sambanthan and MP Sumandiran vehemently opposed it.

Hence the coordination committee of the TNA is scheduled to convene once again today to take a final decision regarding the chief ministerial candidate.